Sunday night we went to the Maracanã Stadium to see the Kaiser Chiefs and Foo Fighters! The approach to the stadium is just incredible, we really couldn’t believe that we were actually there! We had tickets for on the pitch itself (the turf was covered obviously) but who else can say they’ve been in the centre circle at the Maracanã! We chose to stay towards the back as it was packed at the front. What a nice experience going to a gig in shorts and open shirt safe in the knowledge that it wouldn’t drop under 30 degrees! And then to discover that there were beer stalls all around inside the arena on the pitch! And only £2.50 a pint! Take note Britain – just because there’s an event on doesn’t mean you have to rip people off with sub standard products at vastly inflated prices! The Kaiser Chiefs were amazing, but little known in Rio. However, when Foo Fighters came on stage the place absolutely erupted in a frenzy of screaming and fan-worship! Unbelievable! The whole show was brilliant, and just when I thought things couldn’t get any better, the beer stalls became mobile and huge cooler boxes full of beer cans and bottles were delivered right to us! I almost collapsed with excitement!

While queuing for a beer earlier, the young couple in front of me, having taken one look at me, said ” You’re not from here are you?!”. Maybe the fountain pouring off my head gave me away? But they chatted in great English to me and were very friendly. The lad was covered in superb Led Zeppelin tattoos, and it can only be a matter of time before I get another….
We have encountered nothing but friendliness and help from everyone we’ve met. The British are still quite rare in Brazil, and we seem to be a bit of a phenomenon to them. On the tube on the way home, a young guy, fairly drunk, got chatting to us. I’m always a bit sceptical at first, and then this guy told us his sister was studying medicine at Leeds University! Had I told him earlier where we were from I wouldn’t have believed him, but I hadn’t. He was just genuinely friendly! I suppose my job has alienated me from this concept!
Early Monday morning saw us been collected from the hostel for our transfer to Ilha Grande, a 3hr drive and 1 hr boat ride away. It’s become quite entertaining when we get collected for transfers or tours, as we are like Grandma and Grandad getting on a bus full of teenagers! Well, Charlotte is, obviously I still pass for a youth. I slept for a while before waking myself up snoring, then we stopped at a café where I bough flaky pastry based snacks, so all in all it was just like any other day back on Blue Team! The pastry snacks had been a mystery, as I was just using the Smile-Point-Thumb technique. Very surprised to find one of them contained mussels! I can just imagine Taz (our snacks expert back at work) wandering into the Barnsley Greggs and asking “Si thi, tha nos, as tha any of them there mussel bake things? A tha lakin?”
Ilha Grande is a small mountain island covered in forest and jungle. It was until fairly recently a prison, and before that a leper colony. Now it’s a traffic free (barring the emergency vehicles) paradise of beaches, 95 of them to be precise, including Lopes Mendes which is regularly voted within the top 10 beaches in the world. I’ve never done a beach holiday, but this is the sort of place I only imagined the rich and famous come to. Charlotte tells me it’s very comparable to the Caribbean. People had told us it’s very expensive, and maybe by Brazilian standards it is, but by our standards it’s bloody cheap! Beers are still £2.50 for a 600 ml bottle (bigger than a pint), and yesterday for lunch we had an enormous platter for two of chicken in sauce with rice and chips at a nice restaurant on the beach. I’d read the menu as it being £15 a head (which would have been reasonable), but no, it was £15 for the two of us! I love it here! We’re going into seafood heaven for the next few days!
Our hostel, again expertly chosen by my personal travel agent Charlotte, is 10 mins walk from the beach, actually in the jungle! It’s superb, and once again owned by the nicest, friendliest people you could hope for.
Today we’re lazing on a beach half an hours walk from our hostel. Tomorrow we’re having a full day cruise visiting 5 other beaches for an hour each, and on Thursday we’re getting the taxi boat to Lopes Mendes for the day!
It’s 42 bloody degrees today which is way too much for me! I’m having to shelter in various bars!
I’m still persevering with the Havianas, and there is slight progress. I sometimes manage a shuffle-flop, or a flip-scrape, but not yet a complete flip-flop. However, an added distraction today – I have severe chafing of the thighs following days of running and sweating and salt water! It’s as bad as when I ran 69 miles! So I’m like John Wayne on ice! Charlotte finds it very funny, especially when I hold the iced beer bottle between my thighs for a moment’s relief…..

As I’ve said, the island is traffic free apart from the police vehicles, which are two motor bikes, a quad bike and a dune buggy! The dune buggy would make an excellent replacement for 37 at work – I can just picture Andy and Elliott in it, powering along à la Flintstones! All it needs is a “High Maintenance” sign on the back (no, not a typo). At least with no engine in it, there’d be less requirement for it to go to the garage every day, but feet problems though…
Elliott – “Sarge, I’m going to be late to plot today, I’ve got an appointment with the foot doctor”
Steve P – “Again? That’s the fourth time this week!!”
Elliott – “It’s all this running Sarge. It’s playing havoc with my bunions”
Andy – “Me too Sarge. And it’s proper interfering with my dogging too”
Anyway, hopefully there’ll be a photo of it here to show you what I mean. I’ve just sent Charlotte to take one as I can’t walk any further at the moment! 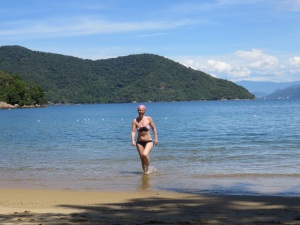 Brigitte Bardot steps out of the sea 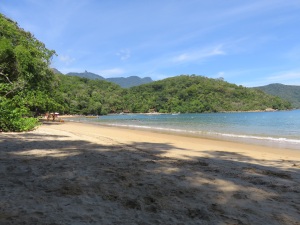 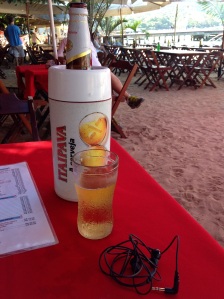 Beer of the hour…

4 thoughts on “Andy and Elliott get a new car……”