Valentines Day? How many of you have taken your partners to Buenos Aires for the occasion??? Just me?? Multiple brownie points for me! (God knows, I need them, I’m still in negative equity!).
We woke to another beautiful day weather wise, as it is forecast to be for the next week at least. Mid 20s and a cloudless sky. Just perfect, and still not sweating! I am now fully acclimatised!
After a lazy breakfast of Frosties and boiled eggs (separately of course) we ventured out on a huge walk through the city. It really is magnificent, with huge open boulevards and lots of space. Most of the buildings are very Art Deco, and we get the feeling we’ve stepped back into the fifties (residents of Rotherham will have to wait another 20 years before they get this feeling as it’s still in their future). The history of Buenos Aires is both fascinating and brutal. Barely 40 minutes goes by without another Revolution and a new government. Even while we’ve been walking today there have been 7 coups and 7 new presidents sworn in, and there’s still the whole evening to go. Nearly every street is named after an ex president, or a special date in Argentinian history. But it appears that every date of the year is special! Instructions to get somewhere would go like this “carry on down 9th July Avenue, turn left into 17th May Street, right into 12th December Lane, and then into 26th October Plaza, you’ll see it in front of the 36 statues of last week’s presidents…”
We’ve been to the Recoleta cemetery to see the mausoleum of Eva Peron. The place was incredible, with the most elaborate and grand mausoleums we’ve ever seen, housing the dead rich and famous of Argentina. Funnily enough Colin, there was a huge ostentatious mausoleum for the Mackinnon family! Something you’re not telling us???? Are you a previous president of Argentina????  I read a brief history of the Perons and their era last night. Very very interesting, especially the fact that she wasn’t laid to rest until 20 years after her death, having been hidden in an attic in Spain (the coffin, that is).
Speaking of the evening, we’re out to Buenos Aires Carnival tonight, so we’ll see what that brings! I’m imagining lots and lots of tango! And possibly a small beer or two.
The strangest thing happened today – we were heading back to our apartment this afternoon, along Maípu Street (pronounced My Pooh funnily enough). This is a bit of a back street, just accessing the rear of big business buildings. No one was around. Apart from a tiny filthy little man. Squatting down in the road. Having a pooh. Into a carrier bag. This was very strange. He seemed to be having some difficulty both with keeping his balance and with the exertion. There was evidence around to suggest that he had already missed the bag several times. What struck us both was that he hadn’t even attempted to hide himself in any way! Maybe he was on some sort of advanced urban CROP course? At least he was making an attempt to bag it? Very very odd.
The tampon shortage has resulted in something I’ve found really amusing – running along side the black market dollars exchange is a black market in tampons! I’ve been beaten to it as always!
Buenos Aires is bloody fantastic and we love it!

I see there was a win for the mighty Whites today, and a drubbing for poor old Barnsley. 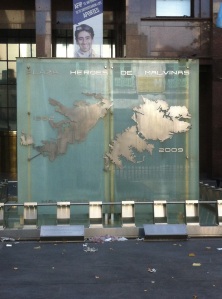 The current Pope’s home church here in BA. Another display of the gross wealth of the Catholic religion (or any religion come to that)

The statue of a young girl who was mistakenly buried alive. Unfortunately she was dead by the time they got to her 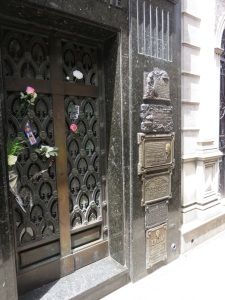 The entrance to Eva Peron’s mausoleum.

The stone Angels from Doctor Who.

As soon as you took your eye off them, the Angels moved. Terrifying.

Just for you Finch!!! Sadly we’re out of town for Steve Hackett, but Brit Floyd is next Sunday so we’ll look for tickets!

Beer. And very nice beer it is too.

3 thoughts on “Well, there’s something you don’t see every day…….”