Bloody hell! Another blisteringly hot day! When will it end?? Will it end?? We both think today’s been hotter than ever before. Funnily enough, today has made me think about Colin, our motorbiker on our team. I’ve no doubt that he’s been sat on his bike for hours and hours today in the cold, rain, frost and snow. Hope your heated jacket’s working Col! Otherwise you’ll be bloody freezing! Haha! Good luck Col! Be warm! Be safe!
Our first mission today was to find somewhere to repair our brand new Canon camera which has decided to stop working. This is a bit of a setback, especially as next week we’re going to one of the most beautiful and best preserved areas in the world, Patagonia. We’ve finally got it to a Canon repair centre in BA. But won’t have it back til March 6th. Somehow I suspect that’s the last we’ll ever see of that…… It’s a shame because the camera is superb. A compact SX 700 HS, which takes lovely pictures, but the massive bonus for us is that it acts as its own WIFI too and transfers all our pictures to the iPad and Dropbox, so we don’t lose any photos in disasters.
So today we’ve travelled 20 miles or so up the river to the Tigre Delta, a posh holiday town. We’re only staying one night, and I booked this hostel. Even I have to say I’ve done a bloody good job with this one as I keep pointing out to Charlotte. A suite, a balcony, a swimming pool. Mind you, Charlotte regularly points out that I’ve spent double the budget in one night! A minor point….
The train to get here was a lovely, air conditioned brand new train, running every 15 minutes. The cost? 45p!!! That wouldn’t get you from one end of Leeds station platform to the other end!
Tigre is a very nice place, but a bit like a toy model town. We can’t quite put our finger on it, or how we feel about it. But the hostel is fantastic, and did I mention it’s unbearably hot??!! So we’ve spent the last few hours in the garden on sun loungers, in the pool, watching life go by on the river at the end of the garden…. I’ve had my headphones on listening to some old favourites. I think Supertramp – Breakfast in America has been today’s top choice. Mind you I’ve obviously been neglecting Charlotte a bit as the old 3 minute “Dead Man’s Handle” kicked in again earlier.
“Paul, the dog next door is barking!”
“Yes, dear, you are in fact correct, the dog next door is barking. Can I get back to Ian Dury now??”
“Paul, there’s fish in the river!”
“Yes, dear, you are in fact correct, there are fish in the river. Can I get back to Lynard Skynard now??”

Charlotte has just finished reading The Snowden Files, about the whistleblower Edward Snowden. I’m reading it now, and it is fascinating. However we have very different views on it, causing our first disagreements! Charlotte is a namby pamby liberal “oooh it’s disgraceful what the government do” sort of person. Whereas I couldn’t give a toss really, and just accept it for what it is. But it probably means that the NSA and GCHQ are reading my blog, so I can just imagine what’s going on now –
Agent Pete Johnson (New York) – “Quick, alert the President! Charlotte reports that the dog is barking in Tigre!”
Senator Delon (Washington) – “No, not the dog! DefCon 1 immediately!!!”
President Obama – “Bomb everyone now! Just everyone! We can’t have the dog barking!!!!”
Or am I barking?
Very saddened to hear reports that poor old Stevie P is working away and has no one to drink with. Never happened in my day did it Steve???!!! Soldier on Steve, and if absolutely necessary just sit at the bar on your own. Pull up a chair next to you and put a pint of Stella in front of it, and chat as if I was there with you. You’ll probably get the same amount of sense back…. Come on Blues for Gods sake! Your Steve needs you!!!!! Steve, if the wifi wasn’t so crap here I’d FaceTime you and have a lovely pint with you! In fact that’s something we must do very soon!
*********************

We’ve just been out for something to eat. But how very strange!
It seems that Tigre is closed on a Monday night, so we ended up at a bar on the river that sold pizza. I ordered a large pizza to share, but the girl was explaining something in Spanish that neither of us understood. So we basically said Whatever and waited to see what came. What it was, in effect was an all you could eat buffet, where the waitress brought you a freshly cooked slice of pizza, one at a time, and when she delivered it to you you ordered your next slice. £8 a person. Big slices of pizza, I managed 5 (Charlotte 4), but I think some of my old team at work could have bankrupted the place! There were 18 different pizzas to choose from, and I was ordering without actually understanding what it said on the menus. My favourite was pizza with chips and a fried egg on top! What a pleasant night! 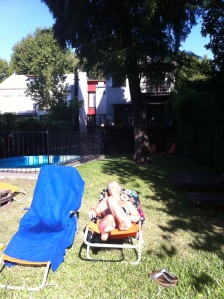 Our room is top right with the balcony 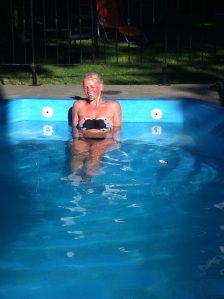 Charlotte creating her own jacuzzi 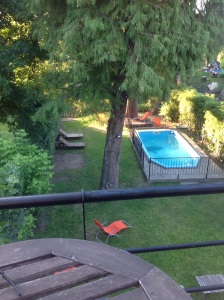 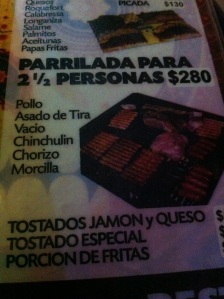 We’re used to seen meals for two people, but not for 2 and a half people!!!! Maybe it’s for if Swifty is with us? 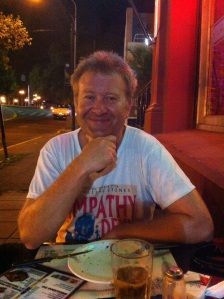