A very happy 78th birthday to my Dad today!!!!! Doesn’t look a day over 50! I think he’s now been retired longer than I’ve been in my job! Brilliant! Well done Dad!!!

We’ve been in danger of falling into a routine of laziness, eating and beer! That’s the problem with not moving on (it’s actually not a problem at all, it’s very nice!) so today we made an early start at a day of being busy…… by the pool at the water park! Off we went to the train station, where we paid an outrageously high price of 32p each, return! The water park is called Parque Norté, and gave us a few firsts –

1. Incredibly, we both had to pass a medical test before entering! I’ve never seen this before, but before being allowed access to the pools we had to go to the onsite medical centre, shower (we were allowed to dress again after!) and then be examined for various skin diseases! We had to show our feet, our hands and our armpits!!!!!!! Obviously, after 6 weeks of Havianas and constantly being eaten by various insects I was a bit worried about this! How embarrassing would it be to fail???! But I scraped through and was issued with a Clean certificate! Charlotte just passed too despite her leprosy, webbed toes, and medical-science-defeating-bowels…..

2. I had never sunbathed on an airport runway before, but now I have! We were right by the airport with jets landing only 6 feet from our heads! Fortunately this only happened every 2 minutes…… I was able to reach up and shake hands with the pilots as they landed! Rachael, you worry about helicopters??? This would have done your head in!  With a bit of luck there should be a link to the video of it here (crap quality, iPhone)

South America in general is obsessed with The Beatles, but nowhere more so than Buenos Aires. Bloody hell! We were subjected to 8 hrs of The Beatles at ear splitting volume in the park! Their entire catologue over and over again! Every 46th track of theirs was followed by a U2 track, then back to The Beatles! To make it even worse, the speakers were all out of sync, so it was just a terrible pulp of music! If this happened in Guantanamo the UN would intervene!!! My ears were bleeding!

The pools were lovely, and we spent the whole day there lazing away. This has once again led to severe sun burn for me, this time on my chest and nipples! As Charlotte says, Will I ever learn???? No.

On the way home we made it to the Guinness bar! Yeah! –

“No we don’t do Guinness. Never have done!” 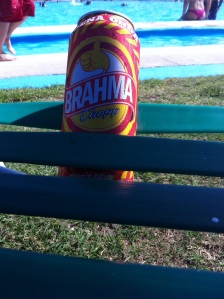 A return to an old favourite today! 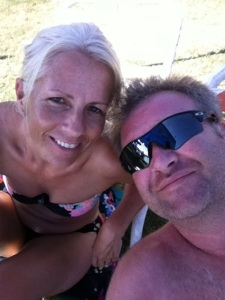 Charlotte is the bronzed one, I’m the pink one….

Being a Friday night I put my 12″ heels on and my best frock before heading out….

Proof that we are disease free! But only valid for 2 days! Who knows what ailments I’ll have after that???? And who is Sharlotte Gok???