My Spanish must be absolutely crap. When I thought I was saying to the taxi driver this morning “Plaza San Martin por favor” what I must have said was “Plaza San Martin por favor, and get us there in the fastest, most dangerous and reckless way you possibly can. Do not take your foot off the accelerator nor your hand off the horn. Pay no attention to any traffic lights or other nominal road signs. Have no regard for the safety of us or any other road user. At no point in time travel under 120mph. Use every lane possible at least 6 times in every 10 seconds.”
My god! What a terrifying journey! 20 minutes of it. If I knew the Spanish for “For christ’s sake slow down you Peruvian maniac!!! We’re all going to die!!!” then I would have used it. But I didn’t so the only other option was to close my eyes and wait for the inevitable crash….which amazingly never happened! However, one good thing about Peruvian taxis is that they’re cheap! You have to negotiate a price before you get in as there’s no meter. We’ve perfected the art.
Me “Can you take us to xxxxx which is approximately 150 miles away?”
Taxi “Yes, but it’s going to cost you. Let’s say 17 pence?”
Me “No way you thieving cad you!!!”
Taxi “14 pence?”
Me “Deal!”
And there’s no tipping the driver either. Mind you after this mornings journey the only tip I was going to give was thrash the bollocks off him. Bloody insane.
Anyway, after that we were able to see what an amazing place Lima is. First of all in the historical centre, where we visited churches and catacombs (grandad mode), then to the Presidential Palace where we caught the changing of the guard. Not only was this visually spectacular but also very amusing, as there was lots of straight-legged goose stepping going on, but very slowly. All we could think about was Monty Pythons Ministry of Silly Walks, Basil Fawlty, and for some bizarre reason Chitty Chitty Bang Bang! I fully expected them to start slapping each other with fish! This happens every day at midday. There was a heavy security presence outside the palace in usual South American style – police with AK 47’s, water cannon, riot shields and suspicious looking secret service guys in suits and sun glasses. All very entertaining!
Lunch was another great surprise. We opted for the expensive set meal (£3.00 each!) which included a pitcher of soft drink, starters (I had langoustine soup, incredible, Cha had cerviche!), and main courses of steak for me and trout for Cha! It was all so huge neither of us could finish! Then a small melon dessert, and a glass of the national drink, Pisco sour! Unbelievable value! Seeing as we threw some beer in as well, the bill, including tip, came to just short of £10!!!! That was seven hours ago and we’re still not hungry! (There was a cheaper option at £1.60 each, which seemed to include the same sized dishes with just a few less choices).
We then visited the area of Miraflores where we found an amazing bar on the cliff top over looking the sea which kept us very entertained for a few beers, before walking a couple of miles along the coast, watching the sun set and then through the arty bohemian area of Barranco where we’re staying.
Lima is so much more than we expected, and despite my phone incident last night, we absolutely love it. Wonderful friendly helpful people (apart from the “young bounder” who stole my phone), beautiful places, and more culture than you can shake a stick at. Also, even I, at 5’10”, am a giant here! Everyone is tiny! Ken and Linda, you should move here! You’d be really tall!!!
Charlotte discovered this morning that Lima is prone to frequent earthquakes. There are signs on the streets pointing out the safest area in the event of a quake. So Cha has spent all day darting from one Safe Zone to another. Surely after the misfortune we’ve had this week we can’t have an earthquake? Can we?? Rea……..aaaaaaaarggghhhhhhhhhh!!!!!!!! Only joking.

Charlotte has also taken on two new roles today – 1. Hairstylist, she waxed my hair for the first time! 2. Head of security seeing as I’ve failed miserably at this task. She is now in charge of bank cards, money, and the one remaining phone….. My list of tasks is now somewhat depleted. However, I’m still Head of Beer Choice, so all is not lost!
Tomorrow morning we’re visiting Mario Testino’s gallery and museum. Seeing as Sam is working for him now, I’m wondering how many times I can drop this into conversation with the staff…… Don’t worry Sam, I won’t, honest! And then we move down the coast a bit to a village on the sea called Paracas for a couple of days. Spiffing!!

http://youtu.be/ClADez-Zdls  (video of ministry of Silly Walks at Lima Palace, lopsided because Charlotte took it….)

Me and waxed hair. Notice the empty phone pocket….

My favourite badly translated sign yet! The top 3 lines are brilliant! 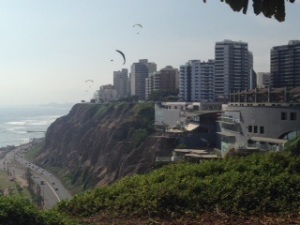 The view from our afternoon bar….

The private pool and sports area solely for the Lima police!! Bishopgarth, not.