Paolo was a little depressed. At the grand age of 45 he’d had to buy a tube of denture paste. What made the whole experience even worse was the fact that he’d had to mime it in the chemist’s – this entailed standing in front of the girl at the counter, pulling his front tooth out and putting it back in, time after time. It’s a toss up as to who was most embarrassed or confused. And then, because the instructions were all in Johnny Foreigner language, there was a bit of guess work as to what to actually do with it. Trial and error, involving gluing shut the mouth completely, has brought some small success. Of course this has provided great entertainment and laughter to Carlotta. In retaliation Paolo questioned whether Carlotta’s bulbous backside would fit through some of the smaller passageways at Machu Picchu. Also, Paolo has noticed a new phenomenon in Carlotta, possibly caused by the change in altitude, possibly just caused by slobiness – the increasing events of inadvertent and inappropriate breaking of wind at thunderous volume in public places. Now, a true gentleman would take the blame for his good lady wife. But no. Not Paolo. Because he still had the mental age of a 12 year old he would roll about on the floor, laughing, and pointing at Carlotta.
After ten weeks of non bloody stop 24hrs a bloody day with Carlotta (😜) Paolo had learnt something – whereas he likened himself to a leopard (always alert, sharp, can go days without food without screaming at people) Carlotta was like a steam engine that needed it’s belly feeding every 10 minutes otherwise the engine would stop…..
But still Paolo failed to lose weight. In the North Face shop a couple of days ago Paolo had optimistically tried on a pair of medium sized trousers only to struggle to get them over his knees. The “helpful” shop girl had suggested trying on an XL size. Paolo had laughed at her funny little comment, whilst inwardly plotting to return later that night to firebomb the shop.
He settled for a size L.
Also, his current plan to dye his hair blonde had caused even more mirth with the ever supportive Carlotta. She had stated that perhaps he’d look like an old man trying to look young. Paolo accepted that this was probably true but was still prepared to go through with it, for a laugh if nothing else. Nobody could say that Paolo wasnt game.
Finally, after a 19hr day, Paolo was enjoying the heady effects of high altitude, little food, and a couple of beers. Can anybody tell?
*probably a more sensible blog tomorrow about our trip to Machu Picchu, but after at least 12 hrs sleep. 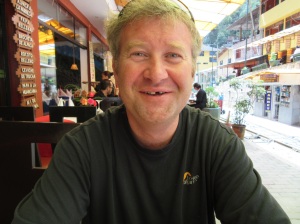 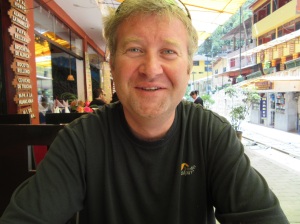 After 10 weeks on the road, Carlotta was beginning to need a day at the Spa 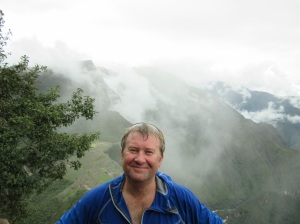 Just like a night in Wakefield’s old Buzz Bar….