Firstly, very sad to hear of the death of Sherriff Roscoe P. Coltrane today. One of the greatest characters ever, and his bumbling reminds me of how I’ve gone through my so-called career…..
Last night we set off for a 15hr bus ride to La Serena. Unfortunately, 10 minutes before the bus was due, we were told there would be no bus, without any explanation. I think a couple of months ago this would have completely thrown us, but now, we just get on with it, and in our ever improving Spanish (and obviously a lot of Spanglish) we found another bus to take us there, though this was an 18hr ride. Not to worry. Got our money back for the original bus and paid twice the price for the next bus (I’m suspecting some sort of scam, especially as we only purchased the original tickets a few hours before). We met a couple of girls who were in the same situation, so all got talking. One was English, but with German parents, studying at Conneticut University USA, and on an exchange programme to Santiago University, Chile! How multi cultural is that!! And her Australian friend had a similarity confusing background too, so much that I can’t even remember it! Once on the bus in our luxury bed-like seats, all was well. I was particularly entertained when we briefly stopped at Calama and a one-legged sandwich seller hopped up the stairs to the top deck to trade his wares. Reminded me of a Derek and Clive sketch!
We’ve learnt to enjoy night buses – they are brilliantly comfortable, and we’ve settled into a routine of watching a downloaded film on the iPad (Thank you so much Blue Team, the Amazon vouchers are still going strong and have proved invaluable! Great present! Who thought of that?????!), then a bit of music before swallowing as many sleeping tablets as we dare and waking up 10hrs later! Perfect! Last night’s film was “Begin Again” and was a really good easy going light hearted happy film. Just what we wanted. I drifted into a coma listening to two albums of Snarky Puppy and one of Wally. I’m always surprised I can do that with it on at full crank! Only 10 minutes after waking up, we were stopped unexpectedly and the police came on board with a sniffer dog! Surely this must be proof of my good behaviour to West Yorkshire Police that he paid no attention to me??!! (I’d given Charlotte the 2 kilos of coke to carry without her knowing…..). Close to arrival, I asked Charlotte if we had anything lined up for the rest of the day. Her response? “I was thinking of a beach, bar and beer!” She never fails to amaze me and just knows how to keep me happy!!
After four weeks of being at very high altitude we’ve finally come down to sea level, and it’s great! Charlotte said its like being on speed, but how Miss Goody Two Shoes would know I have no idea. I can now smoke 8 cigarettes at once in one breath!! Really looking forward to running in the morning!
La Serena is a much bigger town than we expected. We’ve been out of civilisation for so long we’re like people from Wakefield when they visit London, craning their necks at all the shiny buildings! We’ve even been in an enormous supermarket. It’s all very nice, but give me the desert any day…..
But Charlotte really has excelled with this hostel. Definitely the nicest place we’ve stayed with a brilliant garden and wonderful room. We’ve even cooked our own dinner tonight and eaten outside (trying to get back on some sort of budget that might just last a year…..) although the four beers at a very expensive bar didn’t help. Never mind, I reckon Aidy might just dig deep into his vast savings and send us a few quid to keep us going…… Maybe “Jock” Palmer might chip in a pound or two????
No plans tomorrow apart from a run in the morning, and hopefully trying to get a nighttime trip to an observatory as we’re apparently in the world’s greatest place for star gazing. I think I can manage that……
Hope the return to work after your 4 day break with good weather hasn’t been too painful. If it has, just think how bad it’s going to be for us to go back to work in January, and that should cheer you up!!! 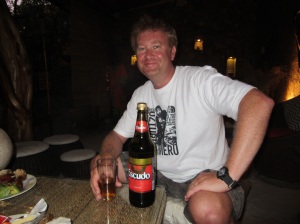 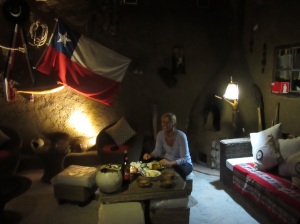 Dinner in our little den outside