Paolo and Carlotta’s last full day in South America! They were both very sad to be leaving this wonderful continent. It couldn’t have been a better start to their adventures!
However, Paolo noticed this morning that Carlotta was morphing into a German – armpits and legs sprouting hair! Carlotta had really let herself go, and Paolo had despatched her to the shower with a brand new Gillette 3. It was that or the strimmer…..
Anyway, they had done a very fine tour of Santiago this morning by bike, with a lovely lady guide. What a brilliant city! And the city had been hosting the Santiago Marathon this morning with 30000 runners, which made Paolo very jealous. So he smoked another cigarette….
Paolo has this crazy belief that once he reaches New Zealand, where cigarettes cost about £4500.67 per packet that he’s going to stop smoking and once again become a champion runner. We will wait and see. More likely is that Paolo is going to force Carlotta to smuggle as many cheap cigs as possible into the country hidden in her backpack. What could possibly go wrong? At worst, Paolo’s camper van would be a very comfortable home for one, while Carlotta will be quite comfortable in Aucklands Lady Prison.
Paolo is hoping that the currency exchange in New Zealand will not be a problem to Carlotta. It’s $2 to £1. So just halve it. However, recent transactions have shown that Carlotta has failed in Bolivia (divide by 10) and Chile (divide by 1000) so Paolo is not too hopeful. God knows what’s going to happen in Vietnam when we have to divide by about 24.5 billion.
Paolo’s cheap Adidas glasses failed on him today. They simply snapped while sat on his head with no external forces. At £2.50 for 3 weeks Paolo was very disappointed, and is seriously considering splashing out on some real Oakleys again.
Paolo has just been talking to a (very pleasant) American who is travelling on his Kawasaki KLR650. He’s been away for 13 months now, and has ridden from Las Vegas to Ushaia at the very southern tip of Argentina. That’s proper travelling! His friend who he set off with fell in love with Columbia, and is still there 10 months after arriving! So this guy is slowly making his way back up there! Paolo is quite jealous and starting to have big ideas!!!!
Tomorrow see’s the adventurous twosome head to Santiago airport, but not until late at night. However the lure of the airport lounge is bound to see them there very early for their flight in order to indulge in free snacks and beverages! Somewhere along the 13 hr flight we lose a whole day due to the date line! Tuesday just doesn’t exist!!! This is definitely “not on” and Paolo is considering asking West Yorkshire Police for an extra day of leave in lieu….
Plans are being made for New Zealand, but so far the only definite seems to be that Paolo has sole responsibility for emptying the camper van toilet, whereas Carlotta has no tasks!!!! What on earth is going on there???
Paolo’s summing up of South America:
Brazil – best place in the world for beaches and bottoms! My god, the bottoms……..
Argentina- Buenos Aries, our next place to live!
Patagonia – the greatest outdoors in the continent! The glaciers!!!!!!!!!
Peru – top quality phone thieves! Colca Canyon and Machu Picchu- stunning!
Bolivia – mental!!!!!! The Salt Flats! And Death Road!!! Both beyond description!
Chile – civilisation! And stars, galaxies and the Universe!
And above all, fantastically friendly people wherever we’ve been!
New Zealand, you have a lot to live up to!
So, farewell from Paolo and Carlotta, in NZ we will be metamorphasising into Maxine and Paddy!!! Cheers!! 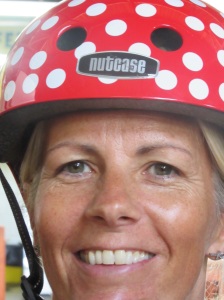 Carlotta with the most aptly named cycle helmet ever…

Paolo couldn’t quite put his finger on it, but something smelled fishy….

The cathedral at Santiago, outside of which Pavarotti once performed

Are Paolo and Carlotta A. Doing Le Tour de Chile B. Going shopping C. Just generally pottering around having a very nice time!!!! 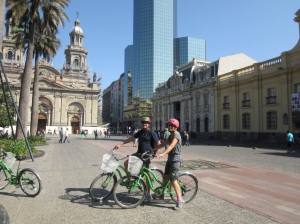 Paolo still not convinced that the new Pinarello is all it’s cracked up to be…. 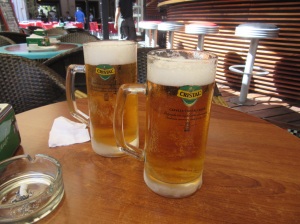 Santiago from above. A great city!

2 thoughts on “Farewell from Paolo and Carlotta! And Carlotta goes feral!”