An early morning get up, full of excitement at our imminent new adventure! And another beautiful day! New Zealand in autumn is better than our summers!
Charlotte and I were getting a lift with Ange, Jade and Carly, who were darting off to various schools and work. I think Jim was looking forward to a nice peaceful day “working” from home!
On arrival at the camper van place all went swimmingly well.
Anyway, having pleaded poverty and tight budgets, we soon got a magnificent deal on the insurance, bikes, accessories, in fact every extra you could get was thrown in! If I’d been sensible, and sorted it all out beforehand, we’d have paid over £500 more!!! See, it sometimes pays to be slack! (Remember that Rachael!)
So. The van. And what a beauty it is! It’s called a Breeze 2, from Wilderness NZ. There are strict rules in NZ on where you can and can’t camp, but our van, complete with toilet and shower and kitchen, can camp pretty much anywhere. Total freedom!
We’ve headed north out of Auckland towards The Far North (up Far North Road), and after a couple of hundred km we have found heaven!
Now, about 15 years ago, on a camping trip with dear old Cliffy, we found a little spot of paradise at Loch Arkaig on the west coast of Scotland. I have brilliant memories of being totally at peace there, assisted by Stella and Pink Floyd. The greatest spot in Britain.
But here I am, my first night in a camper van in NZ, and I already think I’ve equalled it! (And yes it really has taken that long to find something to beat Arkaig). We’ve dropped anchor at Ocean Beach on Whangerei Heads Rd, about 30km east of Whangerei, and it is just unbelievable. We’re just at the head of the road (it ends here) and step out of the van onto the dunes, then only 50m to the sea. No one else around at all. The view from the van is incredible. And as night time drew in the stars came out, in almost an epic as fashion in Chile. Mind blowing. The Milky Way trailed directly over us. Incredible. I think we might have peaked early…..
Dinner was cooked on the stove and on the bbq (gas powered, provided with the van), and to celebrate we had sausages and mash with onion gravy! God, how we’ve missed that! Washed down with a few Flame beers (cheap in the supermarket but still above the minimum acceptable standard of 5% strength). Perfect. And followed by one of the best night’s sleep I’ve had, in our lovely little bed! 6 weeks of this!!!!!! I hope it never ends!!!
Again, awake early, just in time to see a spectacular sunrise, and then off running on what appeared to be my own private beach! It’s only half a mile long, but I did three miles and lots of intervals up the killer sand dune. In bare feet, which was bloody hard work in the soft sand. But so beautiful, with the incoming tide sweeping my footprints away behind me. Easily my most favourite running spot yet.
The shower in the van was great too! Hot water!!
We moved off about 10ish but parked up again only a few miles away at McLeod Bay to get the barbie out to make bacon and egg sandwiches! It’s a tough life!
The rest of the day was spent pottering northwards, up Russell Road, whose 60 mile length would make one of the best cycle routes ever – long hills and descents, and dropping to sea level every few minutes passing through bay after bay. I think Helena Bay was our favourite.
So tonight we’re in Russell (I hope Russell doesn’t mind??!!), actually on a camp site as there’s no permissible free camping in this area. But it’s great. Very quiet, the Milky Way again above us, and a meal of snapper and salad inside us! It’s everything I hoped New Zealand would be!
Continuing north tomorrow (Wednesday) to a little spot at Karikari Peninsula where we believe we can free camp in solitude….
Wifi is occasional here, so the blogs will just come and go as and when……

Taken from our bedroom window! What a sunrise! 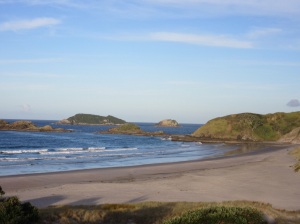