Sunday 3rd May
Well. I nearly made a nasty mess in my pants! There I was, 8am, just having a little stroll along the beach when I thought I’d climb a small rock to get a better view. And there perched atop it were two beautiful seals, basking in the morning light.
“Arrrrrrrrrpppppprrrrgggghhhhwwwww” said the seal
“F*****************g bejesus!!!!” said I, startled to the point where you may have thought I’d been shot by one of the fearless duck hunters. I almost fell over!
Wanganui headlines – “English man having early morning fag eaten by two rampant seals!” Well, something like that. Anyway, having got over my initial shock, I dashed back to the van to fetch Mrs Rock, and together we spent a few minutes with the seals.
“What you up to?” said seal
“Well, we’re just travelling around your beautiful island” said Mrs R.
“Have you seen my wife?” said seal
“What? Who? What the hell are you on about?” said Mrs R
“Heidi. Heidi Klum. She left me ‘cos my skin was so bad” replied seal. “And she owes me 10 quid!”
Etc. Etc……. (Have you noticed I use etc. etc when I don’t know where this is going???)

Anyway. Enough. Moving on, back in Wanganui we found a lovely café with free unlimited internet! Wow! This is very strange in NZ, where the Internet costs a fortune, usually about £20 for 500Mb in cafes and bars. So this was a proper treat, and we relaxed there drinking Flat Whites (?????) and downloading everything we needed. It’s strange how little things become luxuries!
We’ve ended up at Otaki beach, about 50 miles north of Wellington, where once again we have a superb spot on the beach front. In fact we were at one point parked actually on the beach! And being Sunday we treated ourselves to a huge pile of fish and chips! Guilt then got the better of me so I ran 5 miles on the beach which as always was exhilarating.
Yes, I know, endless photos of sunsets that all look the same. But I can’t help it! They are so stunning!
Other matters – I’m reading two books at the moment, The Luminaries (which to be honest I’m struggling with a little) and The Book Thief, which I can’t put down! Brilliant book! Music wise, I’m listening to Alabama Shakes new album, and a lot of blues stuff. Blues For Mrs Pauline/Leave My Boy Alone by Ana Popovic is getting a lot of play at the moment. Joe B, it’s on Spotify, give it a listen. Superb!
I’ve just been out barbecuing sausages for our sausage casserole/stew tonight. I think Charlotte has caught on to the idea that spending an hour outside in the darkness gives me a chance to drink unlimited beer and smoke £367 worth of cigarettes. Charlotte wisely stays inside. But I love it! A barbecue every night! And I just sit looking at the stars – Orion, Jupiter, the Southern Cross are always here to guide me (yes, these are the only 3 I know down in the Southern Hemisphere!). I was experimenting again with long shutter exposures on the camera tonight. The downside is that I get engrossed in it, which led to the over exposure of sausages on the bbq! And it’s never a good idea to over expose your sausage! (Your Honour, I was taking photographs, and I just left it out a little too long……)
Later……
The sausage stew was magnificent! And there’s enough for tomorrow too! I have to say, in total contradiction to my usual bloggage, that Charlotte has cooked brilliantly (praise for Charlotte?? Have I gone mad???). Every night we have a great meal, and I’m eating much healthier than I do back at home. Long may it last…..
Our camper van gets a lot of attention everywhere we go. People stop to look at it and often ask us questions about it. It’s not very big compared to some we see, but it’s been the best thing ever so far. Very happy with it!
Another new experience today while running – I could feel my lengthening hair flopping on my head! Made me feel a bit like Boris Johnson, which is obviously not a great thing…… Although maybe this means I could be Mayor of London when I return? I think I’d be very good at it! Vote Rock!!!! Free beer for all!!!
We are quite pathetic when it comes to bed time. Often we’re in bed by 8!!! Although I think it was half 6 one night! But it’s soooooooo comfortable! And we read, and look out of the window at the sea! And occasionally we have film night in bed, where we watch something on the iPad that we’ve downloaded. Recent hits have been Before I Go To Sleep, Ché, The Grand Budapest Hotel, Boyhood, The Imitation Game, Interstellar, Begin Again…… All highly recommended. We haven’t even been to a pub since we got the van! It’s a lovely, very simple life, and I don’t want it to change!! Going to bed early means we’re up very early, which is great as we get the most out of our days.
I’ve promised Charlotte I wouldn’t mention the traumatic toilet-emptying situation today, so I won’t…….. But I think I might need counselling……..

Here’s another little treat for you- this is a video clip of Charlotte demonstrating her groin strain. Quite pathetic really……

This “den” will be about the limit of what we can afford if we ever get back home….. 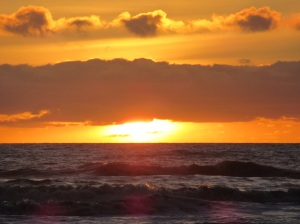 2 thoughts on “A Seal Surprise!”