Monday 4th May
We have been confronted with the terrible truth that we are no longer fit for human company. We managed a whole hour in the capital of Wellington before we felt the need to flee to the beach for solitude! We are unable to cope with civilisation! And anyway, Wellington City itself didn’t seem to have too much to offer (in our very humble opinion). So off we went, 6 miles down the road, to Owhiro Bay to camp in a car park on the shore. We even brought our ferry crossing forward by a day!
Our camp spot was a well known spot for camper vans (being free and close to the ferry terminal), so solitude is not what we got. But we did have a lovely bike ride and a brisk bracing walk along the beach! After that it was time to batten down the hatches as we were being brutalised by high strength winds. It actually got a bit worrying at one point when we thought the van might get tossed around the car park! “If it gets any stronger you might get blown off!” said Charlotte…….. Come on wind!!!
Anyway, we survived the night.

Tuesday 5th May
Up early to get to the ferry. This was very exciting for us! And being the impoverished and budget-stricken travellers we are, we upgraded to the Premium Plus Lounge on the boat! This meant comfy seats, free breakfast buffet, drinks, alcohol (I had to drive!!!!), wifi, papers etc, and was well worth it for the 3 and a half hour crossing. I got my money’s worth within my first visit to the buffet, and the next 12 visits were just a bonus. Various items were also snaffled for later consumption…..
We were entertained by many announcements over the tannoy, our favourite being “Well ladies and gentlemen, it’s 20 past 10 in the morning, so that means it’s scone o’clock!”
The crossing is spectacular, especially when we (very aptly for current events) sailed up Queen Charlotte Sound. It’s how I imagine the fjords to be. And when we had a couple of dolphins dancing along next to us it just completed my joy! 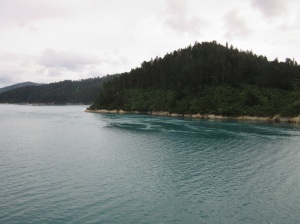 We docked at Picton which is a lovely little harbour town, and then took the North East road towards the coast. This is described as the windiest (as in bendy, not blowy!) road in the South Island, and much of it is unpaved. Again, spectacular, rising to great heights then dropping into tiny bays. I think it’s become my new dream road for cycling, though it’d have to be on a mountain bike. However it induced high levels of nervous tension and anxiety for Charlotte, whose coping-with-stress-levels seem to be fading exponentially to the time she spends with me…..
We nearly stopped at Robin Hoods Bay for the night, having passed Whitby yesterday, but have opted instead for Whites Bay (surely named after the mighty Leeds United?). Just 30m from the beach and the cove. No one else around (yet). Mountains in the nearby area include Gordon’s Knob, Doctor’s Knob, Mount Horrible, and The Rock! (Good name for a band, Doctor’s Knob and The Rock).The Steinlagers have been opened and all is well! Looking forward to Cloudy Bay Winery tomorrow!
Sadly learnt yesterday of the recent unexpected death of an old school friend, Howard Boughton. Seems he had a massive heart attack, aged 45. Another sad reminder to us of why we’re doing this trip now and not waiting for our latter years. Worryingly for us (and very selfishly), Howard runs/ran Rocket Removals where all our life’s possessions are being stored……
Later…… The beach at sunset was amazing. The sea is as still as a pond, and the air is strangely warm. The cove is surrounded by rain forest and it would be easy to imagine we’d been washed ashore here with no way out. It was mesmerising. Charlotte celebrated the moment by mooning at me….. Classy bird. 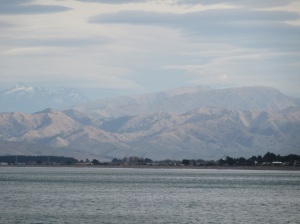 I have cooked a chilli con carne which should be big enough to see us through the next 5 weeks….. We may have to get a trailer to tow at the rear to carry it in.
Finished reading The Book Thief today. What a brilliant book. I’ve now started The Narrow Road To The Deep North about POWs building the Burmese railway. Already loving it 3 chapters in. Is it possible to be a professional reader for a living???? It could be the first job I’m actually good at or care about?? Although we’ve seen that The Cloudy Bay Winery are looking for staff, and I believe I could be the man most qualified for the job…