Saturday 16th May
Yesterday was a lazy day (well, it was for Charlotte, meanwhile I did all the laundry…) It’s the first time since we got the van that we’ve stayed two nights in the same place, and the Moeraki Holiday Park was more than worthy of it! Only £15 a night for a powered site with free unlimited (unreliable) wifi, and a beautiful view over the bay. A bargain.

Having broken a plate I am now only trusted with bowls…. 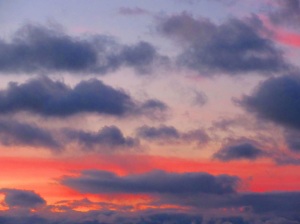 Of course this gave us another chance to head off on penguin watch, so another very happy hour of penguin related jollity and capers was had. Up on the cliff top one walked out of the bushes right in front of us! Amazing to see! I think I might become a penguinologist on my return…..

This little chap just popped out right in front of us!

In the evening we treated ourselves to dinner at Fleur’s restaurant, very highly rated and considered one of the best sea food restaurants on the southern island, despite it resembling a wooden shack on the end of the harbour in a tiny tiny village. And it was spectacular. For our main course we had the seafood tasting plate, which consisted of monkfish (undoubtably the best I’ve ever had the pleasure to taste), moki, sea perch, taratiki and wainau, all caught in this bay today. Served on a bed of vegetables and with two sauces, it was a culinary dream! And such an enormous portion! We were stuffed! But still had room for a gigantic cheese board! Seeing some of the other dishes being served, it’s no wonder they have such a good reputation. The Blue Cod, served whole for two, was the size of a whale! We had three courses, 2 jugs of beer and it came to £70!! Bloody fantastic! To all of my friends who appreciate their fine food, I would say get yourselves here right now! Even if it’s just for a weekend!!! Money well spent! 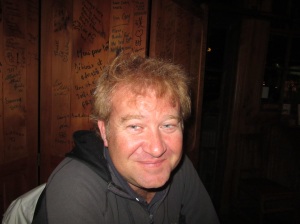 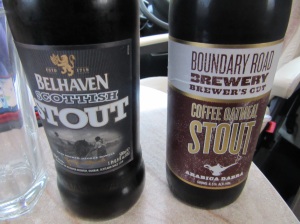 Beers of the Day!

Today we had a long drive as we start to head for the west coast. We passed through Dunedin (large university town apparently modelled on Edinburgh) without stopping as we still have an aversion to people. We didn’t really have a plan today which is unusual for us, but initially we set up camp at Waikawa. Charlotte had already started to make our boeuf bourguignon when I decided that we could find a better spot a few miles away. So with Cha holding onto the pan for dear life, off we went. It’s a new cooking procedure -“Stir the beef in with the mix, then drive for 5 miles, before resuming”. You’ll see, all the big chefs will be doing it soon. We’ve settled at Curio Bay, renowned for its 175 million year old petrified forest, Dolphins, and more penguins! This is the southernmost point of New Zealand, so it’s all uphill from here…..
The forest was, well, petrified. Not in a frightened sort of way, but a fossilised way. And we got to see more Yellow Eyed Penguins! Considering they’re the rarest in the world, we’re tripping up over them everywhere we go!

Now, at 6pm, we’re ensconced in the nice warm van while the wind blows a gale outside. The Boeuf bourguignon is coming on nicely, the Moa Southern Alps White IPA is slipping down very well, and it’s film night tonight, The Book Thief. Heaven!! 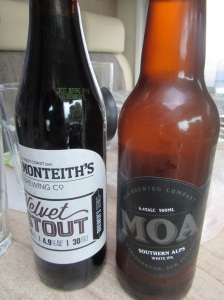 Sunday 17th May
Heavy rain! Quick! Escape!! Drive away! So, off we go, saying goodbye to the coast for a while to head to Manapouri, the start of Fjord Land. We stopped briefly at Riverton for a coffee in the very nice Beach House café. What a very nice spot! The oldest town on the South Island. Shame about the weather! But it was a pleasure to drive along Rocks Highway, which took us past Mitchell Bay! (Charlotte’s maiden name)!
A beautiful drive towards snow topped mountains took us to Manapouri, and we’ve booked into a nice camp site on the side of the lake. The weather’s cleared up, and the views are epic! This is the gateway to Doubtful Sound (so named as Captain Cook was doubtful there’d be enough wind in it to fill his sails…). I can assure him, there is plenty of wind around here! We’ve been strongly recommended to sail on Doubtful Sound, but unfortunately, at over £100 per person for the day trip, it’s just out of our budget. I blame West Yorkshire Police for not paying me the money they owe me!
Anyway, we’re going to head up to Milford Sound and do the cruise there on Tuesday as that’s the day with the best weather forecast. We’ll then spend a few more days in this area.
We’re currently “resting” in the Pearl Harbour Bar, making use of their free wifi, and Bucks Ale on tap! Charlotte’s busy booking flights for us and Josh from Sydney to Cairns in July! Aaaah, the prospect of more heat and beaches!! 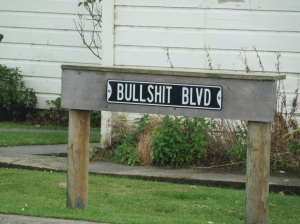 The new HQ of The Home Secretary….. 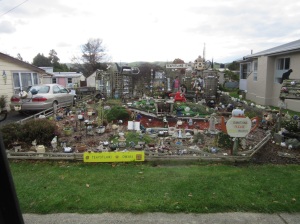 Teapot Land. Hmmmm. Quick, call a doctor for the owner of this! 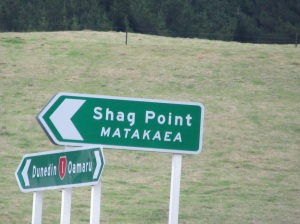 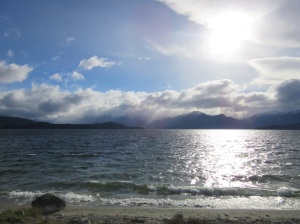 Try telling the Americans that…… 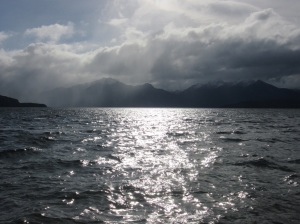 Probably the finest named road in the world!!!