Sunday 31st May
Once again we have been blessed with the weather. The one day we randomly chose to return to Mt Cook turns out to be the best day of the week. Another cloudless sky, tons of fresh snow on the mountains, and temperatures above freezing! Superb!! I always feel at my most happiest in the mountains, and this really couldn’t be better. We’ve returned to the same camping area where we were before, when we were visited by a strange unknown creature rocking the van! We’ve chosen a different spot tonight!
We walked the Hooker Valley Track, past Mueller Lake, over 3 very wobbly wooden suspension bridges, and to Hooker Lake and Hooker Glacier right at the foot of Mt Cook. Magnificent. 3 hrs of stunning scenery and breath taking views. Hooker Lake even had icebergs in it from the carvings of the glacier.
It was quite busy on the track as it’s a Bank Holiday weekend here (for the Queen’s birthday??) and we were constantly amazed by people who seemed wholly inadequately dressed for this area. I mean, after all, we’re at the foot of the highest mountain in NZ, and it’s not warm by any stretch of the imagination, but that doesn’t stop people from wearing shorts and t shirts…. 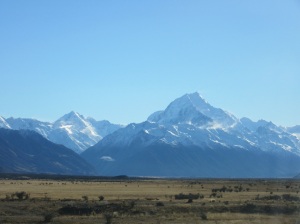 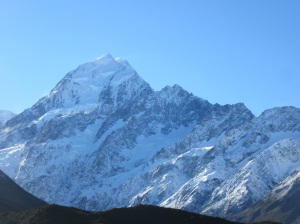 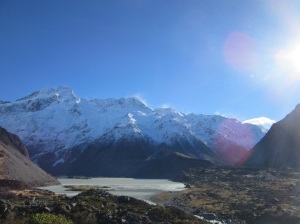 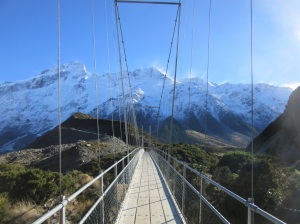 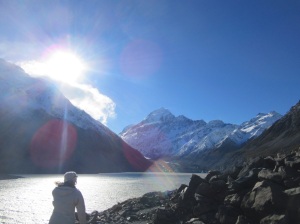 Monday 1st June
How the hell did it get to June already???? Woah! Slow down!!! We’ve a lot to do yet! And I’m in no state to even think about ever working again, let alone actually carry out a job! How will I manage without my mid afternoon sleep? My 11am bacon, sausage and egg sarnie? My constant flow of Moa Imperial Stout (10.2%)? Can we actually integrate into some sort of real life ever again???
So, early this morning, in order to say farewell to the mountains, I ran the 10k of the Hooker Valley Trail. Very very pleasant. Not another soul out on the trail, and the frequent thunderous roar of avalanches crashing down the mountains. Good stuff for a peaceful mind…..
Then a long drive back to the coast at Saint Andrews just south of Timaru, where we’re camping overnight before meandering towards Banks Peninsula tomorrow (east of Christchurch). Only 4 days left in the van!!! Where did those 6 weeks go?
Another rant coming on – I’ve finally once again decided to give e-cigarettes a go, as cigs are too expensive here. But they’re illegal here! They won’t sell any product with nicotine in them! So, they put the prices of cigs up to ridiculous heights but don’t offer an alternative? Even heroin addicts are offered methadone!!!! Come on NZ, it’s not the 1930s here still!!!! (Oh yes it is!) 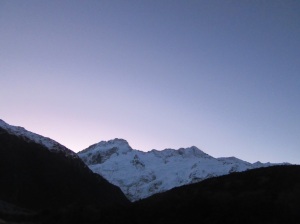 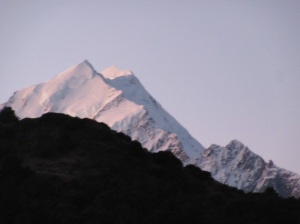 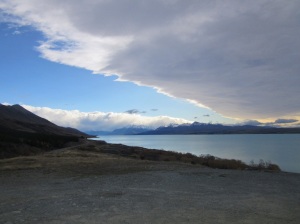 Tuesday 2nd June
Heading gradually towards Christchurch now, but deviated tonight to stop at the beautiful village of Akaroa on the Banks Peninsula, which reminds me of Windemere as the sea resembles a lake here surrounded by hills. Jolly nice! Akaroa was once a French naval area, so many of the streets still have French names and the Tricolor is flying everywhere. We’re currently taking refuge in Bully Hayes restaurant and Bar!
A random musing – if you don’t have a smart phone, like I don’t, then it’s amazing how much quicker visits to the bathroom are…… Speaking of which, some of the roads here are so long and perfectly straight that I’m convinced I could put the van on cruise control, leave my seat and go for a wee in the toilet and return to the drivers seat with no worry. I’d love to see the face on the opposite traffic as a driverless van speeds past them….. 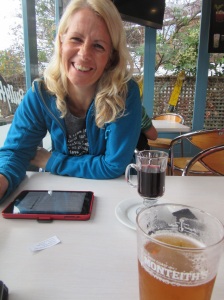 Beer of the day – Monteiths Golden Lager, and a mulled wine for the old girl 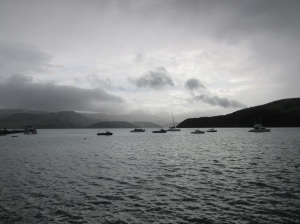