Monday 15th June
Oh yes! We LIKE Melbourne!!! No idea what I expected, but not like this! It’s actually nice for us to be in a city again after a couple of months in New Zealand (meaning absolutely nothing against NZ) but just a good change. This makes Auckland look like a tiny village! There’s the same population here as in the whole of NZ! But it manages to be incredibly chilled and relaxed with it. Very very impressive!
So, I kicked off today with a lovely 7.5 mile run along the amazing cycle/running path along the shore. I’ve decided to enter a half marathon here this coming Sunday, so thought I’d better have a few longer runs before – there’s nothing like having a good training program, and believe me, this is NOTHING like a good training program! I will as usual rely on my stubbornness to complete it, and the promise of a tailor made Marlboro Gold at the end with a flaggon of ale! Stick and carrot etc….
One thing I did notice though on my run today – unlike every single other country I’ve ever run in (which is a few now) none of the runners acknowledged each other. In fact they even went out of their way to look away! Surely it’s not because of me is it? Just because I’ve got a missing tooth and bright blonde/grey hair? I’m only talking about a small nod of the head, or a vague smile. But no, nothing! Very very strange!
Downloaded a new album today which is fantastic to run to – the TFI Friday album! Full of classics like Reef, Babybird and The Happy Monday’s! Good memories!
And then, into Melbourne itself. We’re very lucky to be staying only 20m from the nearest tram stop, but also 100m from the nearest Bike Share station (same as Boris Bikes in London). So, bikes it was, and for £4 each for the whole week, we’ve got free transport! Brilliant! Melbourne is the most bike-friendly City I’ve yet been to, with amazing segregated cycle lanes, and with it being flat too, it’s a joy to ride. Absolutely superb. We biked as far as the Shrine of Rememberance, a huge area and memorial devoted to those lost in wars. After that, we walked for a few hours, taking a suggested route of all the arcades and alley ways within the central area. It really is a beautiful place.
Following a sushi lunch, we then went to the sporting meccas that are the MCG cricket ground, the Olympic Park and the Rod Laver Tennis Arena. Brilliant! What a place this city is! Another hour of cycling through the centre then along the coast saw us back at the apartment! Lots of exercise today!!
So we’re nicely tired now, but excited about being here for the whole week. Tons to do!
Incidentally, we were amused to speak to our Sam today and learn that he’d crashed Mario Testino’s Range Rover…… Another great career move!! Well done Sam! 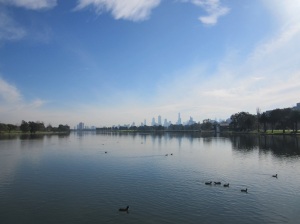 Albert Park, around which I will be running a half marathon on Sunday….. 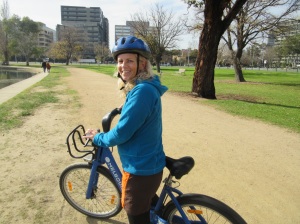 Oh, bring back our Pinarello and Specialized!!!!

This statue depicts the moment when Matt Bradley was asked to pay for a round in the bar, and Stevie P had to carry him out when he fainted 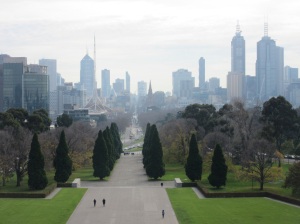 The city from the top of The Shrine of Rememberance 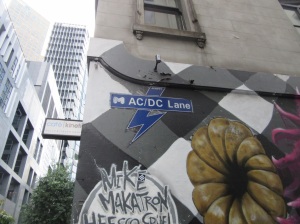 Fantastic to see one of the greatest rock bands in the world having a street named after them! Fine work Melbourne!

This is how I see myself in only a few years time…. 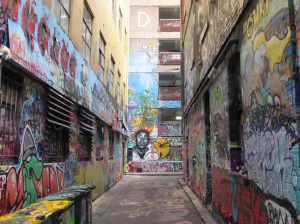 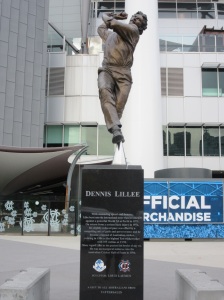 Dennis Lillee outside the MCG. I have great memories of seeing him in a test match at Headingley when I was only about 12 or 13. My Mum, an avid cricket fan, took me off school to go see the match! Top work Mum! 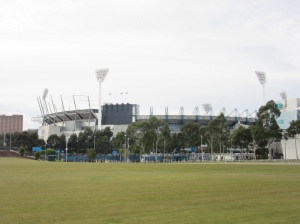 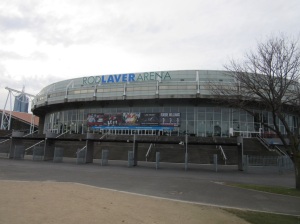 The Rod laver! I’d like to go and see the advertised match between Blur and Robbie Williams! Blur would thrash him!