Still in Noosa. And I hope I can say that in 20 years time! What a great place! Yesterday firstly we kayaked on the river for an hour, looking at all the rich people’s houses. Unbelievable! And most of them are only used for 2 or 3 weeks a year! Honestly, I need to be rich! I could do good things with all that money!!! We then spent most of the day on the beach, although I did go for a six mile run along the coastal path and then back through the forest over the National Park. Brilliant! I think this one ranks as my second nicest run this year (can’t ever beat the run up to Mt Cook in NZ). I needed the run, as we’d been to the pie shop for breakfast…. The beach was of course followed by a few beers in the Surf Club, before a superb evening at the apartment – FaceTime with Sam and Brett, and Bruce. I think Tik provided me with some of the greatest comedy ever at seeing her facial reaction to the fact that her and Bruce have a week together now without the children! To say she wasn’t impressed would be to highly underplay it! Priceless! And we stayed up late to watch the Tour de France live as it went over Alpe d’Huez- spectacular scenery, great sport, and I actually missed being there! First time in 14 years not at the Tour……

Also, more incredible news! – we’re meeting Shelley and Sarah in Bangkok for a couple of days in October while they’re on their way to Bali! Magnificent! It’ll be so good to see Josh’s other mothers! What a laugh! We’ll then take a 20hr train ride down to Langkawi for our sailing course. After that we’ll probably make our own way to Bali for last few weeks of sun before coming home………….

Today, we had another boat trip up the river (after the pie shop), leaving us the afternoon to play at the apartment pool – until Charlotte said “Why don’t we spend the afternoon at the Surf Club, eating and drinking on the balcony?”! Aha! Who could refuse an offer like that????!!!! So, once again, the so-called budget shot to pieces….. I need more money!!!!!!!!!! Or a very kind benefactor! Any offers?!!?

Couldn’t write on the road of Alpe d’Huez this year, so wrote this in the sand instead

I’m seeing this as our new house and boat 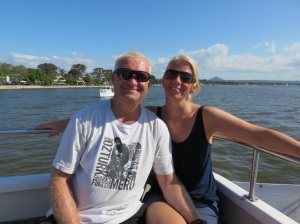