Thursday morning was an early start for our bus to the coast. But before the bus, we checked out of our lovely hotel, and I thought I’d be super generous and leave the staff a £2.90 tip (the equivalent of 10 bottles of beer, and tipping isn’t even expected here!). I expected the hotel manager to drop to his knees and kiss my feet in thanks, but no. Anyway, it wasn’t until a little later that I realised that, due to a malfunction in my currency conversion, I’d actually tipped 29p! No wonder he wasn’t worshipping me!! Haha! Never mind!
Our bus to Halong Bay was like a meeting of the United Nations – us, 1 Vietnamese, 1 Spanish, 3 Israelis, several Koreans, and a couple of Hong Kongers? Hong Kongonese? Hong Kongians? Hong Kong Phooeys? The bus journey was 3 hours of slow, rough roads, but fascinating seeing the villages and scenery. Tony, our Vietnamese guide (who claimed to be Tony Blair’s grandson?) was quite amusing, and once he’d got us through the chaos of the port, we were onto our boat for 3 days – The Golden Lotus. A lovely wooden boat, with only 13 people on board. Our cabin/room is a beautiful wood panelled room with ensuite, far better than we expected! And then came lunch – plate after plate of magnificent food! Bloody hell! This is good!!!! And the barman soon had me sorted – it only took the briefest of glances at him for him to bring me another Tiger whenever I needed!
The limestone karsts are incredible. There are two thousand of them here, ranging from single pillars rising vertically out of the sea, to much larger islands. Spectacular. No surprise that it’s classed as one of the seven natural wonders of the world. In the afternoon we visited huge caves, the size of a cathedral. Stunning.
Evening again saw a procession of plates laden with great food. I’m piling on the weight now! And very little exercise! Oh well, never mind! I did a spot of squid fishing too, but with no success.
Friday was an early start again for breakfast before we headed off on a smaller boat for the day. First stop was Cat Ba Island, but instead of going to the tourist areas we docked in the middle of nowhere and cycled several kilometres to a tiny rural village. This was fantastic, very easy to imagine that we were in Apocalypse Now!!! Seeing water buffalo in the rice fields was such a stereotype image of Vietnam. My bike was a rattling old single speed contraption. I suspect it was last used by an ARVN sniper as he blew the heads off American GIs! The small hills were a definite challenge, and I achieved a whole new level of sweating!!! I can’t even think of a description for it, but it was way beyond “saturated”!  We visited a local family and were offered rice wine. I was initially the only one to accept. It was an acquired taste, a mixture of petrol/schnapps/creosote. In a rare moment of sense, I turned down the snake wine, mainly because it was still fermenting in a vat of snakes! Even I have some limits…. This was followed by another superb lunch back on the boat, before a couple of hours of swimming and kayaking among the karsts. Heaven! The big surprise of the day for me was a visit to a pearl farm – I’d always believed pearls were just naturally found in a few oysters. But no. This farm “artificially inseminates” the oysters with pearl tissue and a seed right into the oyster’s ovary. Incredible! The oysters are then cultivated for 3-6 years before being harvested for their treasure. It was absolutely fascinating!! As the guide opened a shell for us, out popped a beautiful silver pearl! It reminded me of the sweets I used to buy, silver mint trillions, which in turn reminded me of when at school Bruce shot one out of a biro, pea-shooter style, and it bounced off Mr Venables’ bald head! Haha Bruce! Another visit to the head’s office!!!
Again, another evening of fine food and plentiful beer! This is just perfect!
The high point for Charlotte? Listening to one of the Vietnamese crew telling me I look just like Rooney!!!!!! Outrageous! Never have I been so insulted!
And a new dilemma – when talking to someone who has just introduced herself to you, and as you sit there and realise that your flies are wide open, what’s the correct etiquette??? To zip up? Ignore?????? I went for the “covering with t shirt option”!
To anyone thinking of visiting this area, I would fully recommend this trip, and do the three day option rather than the one or two. You won’t be bored for a single second. We’ve been happy to just lay on the sun loungers on the upper deck for hours at a time just watching the amazing scenery. I’d been looking forward to this all year, and it certainly didn’t disappoint in any way. A definite highlight for me.
We’ve met some really nice people on this trip, including an Israeli lady travelling for a month with her two 10 year old twin daughters, and a Chilean/Argentinan couple who live in the Chile area of Patagonia, so we’ve got an open offer to visit them any time we like in one of the most beautiful parts of the world!
So, it’s Saturday now, and after a lazy morning on the boat sailing through the karsts we’ve returned to Hanoi for another night. We’ve really pushed the boat out and booked into a posh hotel with 11th floor roof top pool, and Sky Lounge open air bar! £35 for the two of us!! Smack in the centre of the chaos and craziness of the Old Quarter! Unbelievable! Beers a bit pricey though, at 90p a bottle……. 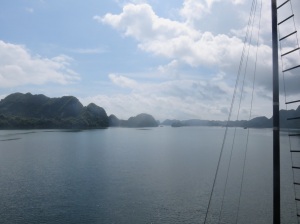 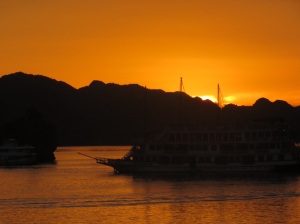 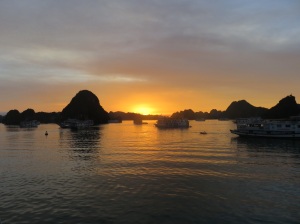 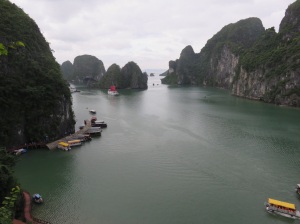 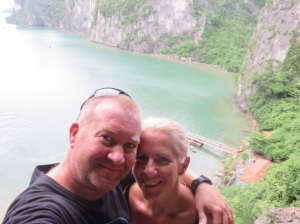 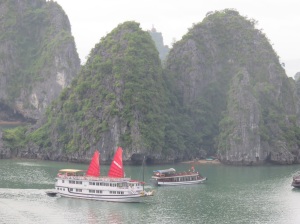 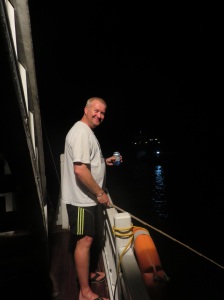 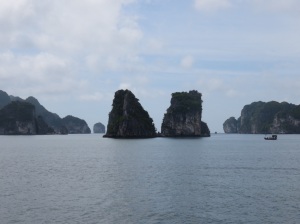 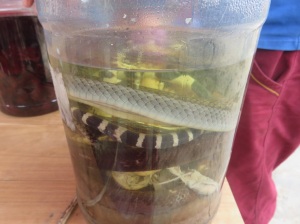 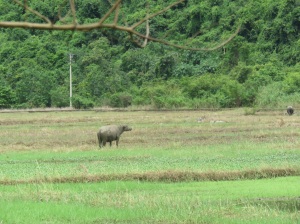 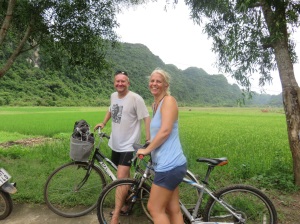 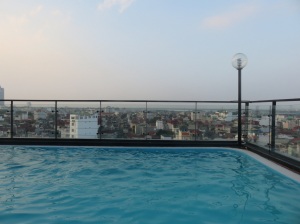 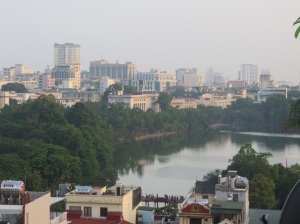 One thought on “Heaven in Ha Long Bay!!!! And Rooney arrives in Vietnam!”