Thursday 1st October
Crikey! We’ve been so busy I’ve not had chance to write! We’ve been trying to fit our original Vietnam plan into a shorter timescale, so it’s all go!
On Monday morning we caught the bus from Nha Trang to Da Lat. This was a 4hr journey on a spectacular road into the mountains, a bizarre mix of the Vietnamese jungle and the European Alps! And because our destination was at an altitude of 1 mile, a much nicer, cooler climate! Heaven! We actually ended up staying in the hotel all evening as we were both quite ill – Charlotte with more symptoms of altitude sickness, and me strangely full of cold! Or it might be malaria. Or the plague. Or Ebola. A right pair of old crocks!
Tuesday turned out to be probably the best day’s sightseeing of the year so far!!!!! We were on a full day’s motorbike tour of the surrounding area, and it was simply brilliant! Our guides/drivers were a young pair of lads who obviously really enjoyed their job and taught us tons of new stuff throughout the day. Our first stop was a hill top Buddhist temple, and was probably the most spectacular one we’ve seen yet. Immaculately presented, with stunning views over the lake. Other stops were made in rice fields, a weaving factory, a mushroom farm, the Elephant Falls waterfall (huge!!!), a silk factory (seeing the process right through from silkworm to thread), The Happy Buddha statue, and a coffee factory. The coffee factory actually seemed to be producing more rice wine than coffee! And we tasted it fresh off the still at 70% proof! Petrol!!! Charlotte also had one of the most expensive coffees in the world – made from weasel poo! The weasels (or what we know as civets) eat the coffee beans, but can’t digest them, so they’re left in the poo! It’s then extracted and roasted, and gives a beautiful thick chocolates coffee! Sells for £1000 a kilo in London! We had a cup for £2 fresh from the weasel’s bum!! Very very nice!
The silk farm was an eye opener too, and made me realise the incredible hard work, done in awful conditions, to make goods that we just take for granted.
We must have done about 100km on the bikes, and it was just one of the best things we’ve done all year! Charlotte now wants a motorbike!
All mornings start very early in Vietnam, so we were off again at the crack of dawn for the 8hr bus trip to Saigon (now called Ho Chi Minh City, but everyone seems to still refer to it as Saigon). It’s another huge city, and was once home to the biggest U.S. Army base outside of the States. Our hotel is right in the centre of the chaos, and it’s just brilliant to sit and people watch. Mark H, we went to your mate’s bar but he wasn’t in. We’ll hopefully try again. We settled into a great bar, with 2 for 1 beers! (18p a bottle!!!) And we got talking to a lovely young couple, Jonnie from Hull, and Sanne from Utrecht. Jonnie has been travelling for three years now, and met Sanne in Thailand 18 months ago. He’s a DJ and musician, and is currently DJing in what is basically a brothel with a bar near our hotel! Fantastic! What a fantastic thing to put on your CV! We had a great chat with them, lots of music discussed, and yet again it confirmed to us how right we’ve been to escape the rat race and travel. Just always so nice to meet such happy and positive people. We’ll be popping in to Crazy Girls for a drink with them before we leave!!
Today we’ve left Saigon for a couple of days on a tour on the Mekong Delta. It’s been amazing so far, and boating up the canal-like tributaries is just like in Apocalypse Now! I’m constantly looking for snipers in the jungle! (I’ve not yet met a Viet called Charlie, as the films would have us believe they’re all called!) On route to our hotel now for a well deserved dip in the pool! 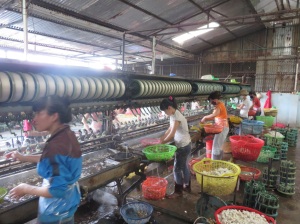 Next time you buy a silk product, just bear in mind how it originated from a stinking furnace-like sweat shop….

A terrifying dragon. And a beautiful sculpture of a mythical beast. 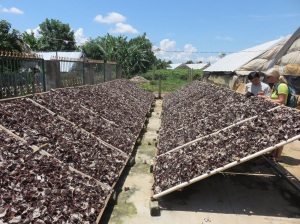 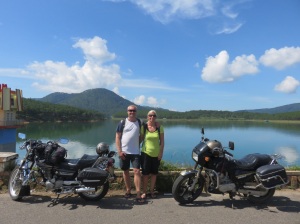 No idea why there was seen a need for this sign….. 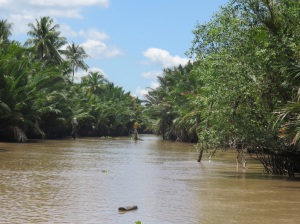 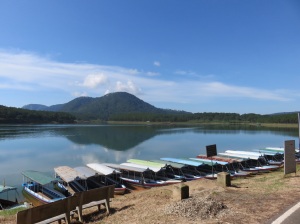 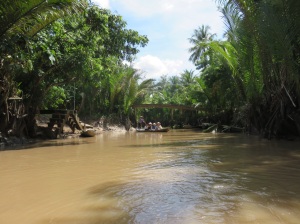